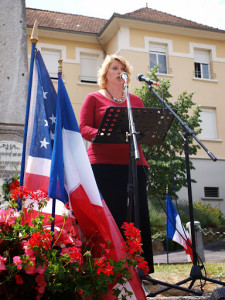 This past weekend it was my distinct honor to present to our summer community of Axat, France a full-length concert with my husband, Joseph and to sing the French National Anthem, La Marseillaise, for the village ceremony on July 14th. Yes, that’s correct…an American sang La Marseillaise, in French, at the public square for the official presentation of flowers at the war monument, Mayoral speech, and waving of flags. But the speech wasn’t usual this year. Mayor Marcel Martinez spoke about how the Americans & French have been in relationship for many years and how the American soldiers liberated France from the grip of the Nazi occupation. And as he gestured to the French and American flags co-mingling in the breeze at the foot of the monument, I was deeply moved to be part of this ceremony linking together two countries – in the past, and in the present. (BTW…standing at the foot of the official ceremony today was Axat’s oldest surviving WWII veteran; his medals neatly pinned to his shirt, leaning on his cane but standing firm. I’ve passed him countless times in the streets on my way to buy bread or cheese…we’d chat a moment or two as he’d gather his breath from the steepness of the route, and then we’d separate on our ways. Today, I have a new reason to chat with this dear man, and a deeper respect for him.) 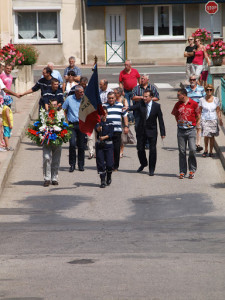 How touching indeed it is that the people of this wonderful village have opened their hearts to Joseph & me and embraced us with double kisses and warm smiles. A new alliance, a new togetherness, has been forged right here in the foothills of the Pyrenees, where we are all neighbors and friends living in harmony. Every person in this small community has a part to play, and a role to fill. From Claude (our sound engineer for the weekend) who loads his sound board, mics, speakers, and cords into a tiny truck, and who actually measured me, the height of my borrowed music stand (thank to Jules from the music school in Quillan), and the distance from the microphones to get everything set up for me for Bastille…it was perfect – to Phillipe from the Chamber Office who coordinates many of these events and captures the action with his camera for posting in local newspapers, blogs, and websites – to Poul (a Danish neighbor) who built the stage for us to stand on for the concert – to Christine who handled decorating and refreshments – to Pierrot who distributed countless posters for our concert to local businesses – to Jean-Claude who is the Chief of the Fire Brigade who came to my immediate rescue with powdered insecticide when the grassy space where I was to sing from was discovered to be infested with ants. Everybody giving from their hearts, most unpaid volunteers, pitching in together. And we pitch right in too: helping to set up chairs and tables, hang streamers and lights, and anything else we can see needing to be done.

Joe and I felt honored to be asked to sing for our neighbors and friends, and we just wanted to give them a good concert as a gesture of thanks for the kindness they’ve shown to us. But these past 3 days, we have been the recipients of more smiles, thanks, hugs, and kisses than many people receive in a lifetime. Music has a way of touching the soul, bringing people together, and speaking a universal language. 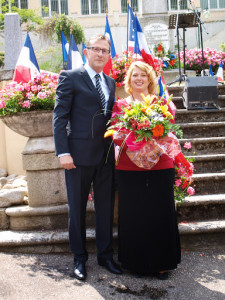 More than 120 people packed into the old church in the High Village, on a very warm night, to hear our concert. Neighbors, friends, business owners, vacationers, village officials, and seasonal residents. We needed to hold the concert for 10 minutes as additional chairs were brought up from another building in town…and every seat was filled as it was placed in a row. They applauded as I opened the concert with a verbal explanation, in well-rehearsed French, of how we’d come to live in Axat for these past 4 summers, and some background on our music careers in the USA. But it was upon hearing us sing that the applause turned to cheers, eyes welled with tears as they sat in rapt attention, and finally an enthusiastic standing ovation, that I was reminded by this outpouring of love, support, and appreciation that ‘it is in giving that we receive’.