Summer in France 2011 – The Balloon Ride 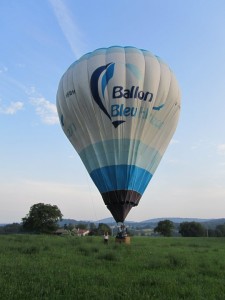 Anticipation wakes me 15 minutes before the 2AM alarm is to ring, and I turn it off to soften Joe’s rising at this early hour. See a year ago, Joe bought us a ride to celebrate my birthday and our anniversary, but weather kept us grounded in 2010. Now was the morning we’d awaited for over a yeaer! We dress in long pants, long sleeves, and sensible shoes (as directed by our pilot, Eric), eat a little breakfast and make our way to the car for the 2.5 to 3 hour drive West…past Foix, just north of St-Girons, to the Marie in the tiny village of Cerizols. Along the dark, twisty drive we encounter some creatures of the night…a few deer, bunnies, many outside cats, and I swear it HAD to be a Jack-a-lope because there isn’t a rabbit in the world THAT big! I thought it was a deer; Joe thought it was a coyote. It had the ears of JarJar Binks from that terrible episode of Star Wars.

Only 1 missed turn, which led us to an AWESOME grotto/tunnel…must go back and explore it sometime…and we were at the meeting point just 4 minutes late; 5:34AM. The beautiful Colette bedecked in Ballon Bleu jacket and pants had us climb into her rugged 4×4, no small feat for somebody my height, and we drove to an open field in the very pre-dawn light. There our balloon was waiting, stretched out in the field awaiting passengers – and heated air. We were greeted by Owner/Pilot Eric Tritz, who gave us safety instructions and asked if Joe would like to assist as an honorary ground crewman (aka…anchor). Joe did a magnificient job holding onto the top rope as Eric & Collette filled the balloon with air, holding tightly as the balloon lifted slowly upright allowing the temperature inside the balloon to mix properly. Great Job Joe!

Eric, Joe & I, and a mother & daughter climbed into the wicker basket below the giant blue and white balloon, ropes were adjusted, Colette kissed Eric for a good flight (they are a lovely couple!!) and we started to rise above the earth. We watched the sun rise and light up the not so distant Pyrenees Mountains. We listened to roosters wake farmers, to dogs barking at our approach, to the sound of deer ‘barking’ in the forest…and to silence. Since I was young I have wanted to ride in a hot air balloon – to float above the ground like a feather. We all have a ‘bucket list’ either in our mind or actually written down; yesterday I crossed off an item. Thanks Joe for an awesome adventure.